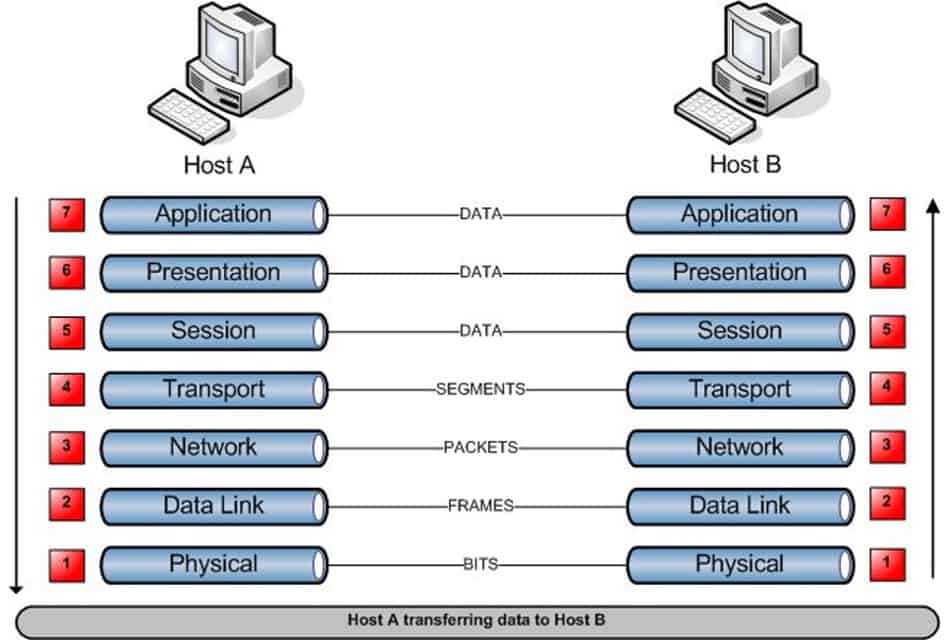 Overview of the OSI Model

The OSI model consists of seven layers or steps that data should go though while getting from an application to the physical wire.

A good what to remember the seven layers is All People Seem To Need Data Processing.

Here is what each of the layers do;

The presentation layer works to transform data into the form that the application layer can accept and vice-versa.

Compression and encryption also take place at this layer.

The session layer establishes, manages and terminates connections between applications.

NetBIOS and RPC operate at this layer.

The transport layer ensures the data transmission is reliable by providing end-to-end error recovery, the transport layer also provides flow control meaning that the Transport layer looks to see if data is coming from more than one application, if so it integrates each application’s data into a single stream for the lower layers.

TCP and UDP operate at this layer.

Routers, Multi Layer Switches and IP operate at this Layer.

The Data Link layer deals with how the data if formatted (Frames), the data link layer also commonly adds error detection and correction by the use of a CRC bit.

Layer 2 Switches, Ethernet, Token Ring are some types of devices that operate at Layer 2.

Hubs and Repeaters are a Layer 1 device as they have no intelligence each interface is simply physically connected to every other interface.

When data is transmitted from one Host (Host A) to another Host (Host B) the data flows down the 7 Layers at Host A and across the physical media in the form of binary data, when it arrives at Host B the data travels back up through the seven layers on Host B.

TCP/IP stack vs. the OSI Model

When TCP/IP was created by the Department of Defence around the same time the OSI model was created the TCP/IP operations where defined in its own 4 Layer model.

Each of the DoD layers corresponds to one or more of the OSI layers.

2 thoughts on “The OSI Model”